What’s in a Drone?

Here at the Leo we’re excited to host the Drones and Droids program this weekend, February 18th through the 20th. In considering what to write about this week, I was oddly captivated by the word “drone” itself — me being the kind of person who finds lexical things captivating. I started wondering why we’ve attached this word to a machine at the forefront of many minds in the world of technology: the Unmanned Aerial Vehicle (UAV).

Historically, it’s a little unclear when UAVs were called “drones,” but there’s some evidence that the term was used during World War II to describe remotely powered aircraft. Military personnel started calling them “drones” because they didn’t have a mind of their own.

In the biological world, a “drone” can refer to a male honeybee that comes from an unfertilized egg. Whereas female worker bees gather nectar and pollen while using their stingers to defend the hive, the drone’s primary responsibility is to mate with a fertile queen. For this reason they’re sometimes described as “doing very little work” in comparison to the rest of the bees in the hive.

But what other plausible meanings could I unearth? Predictably, my quest led me to the dictionary: 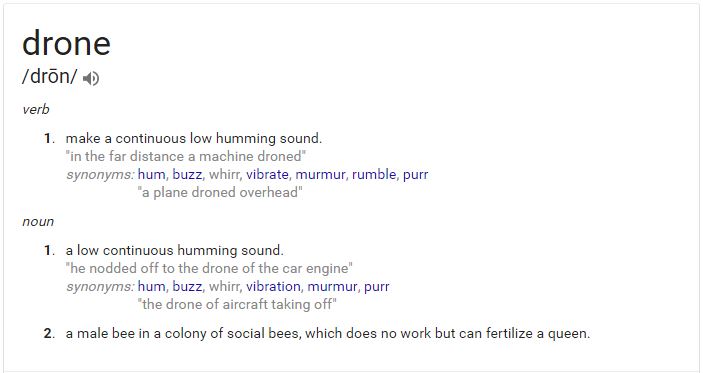 It’s been discovered that the first use of the word drone was around 1520 AD, and the word itself has some etymologic similarity to older words like the Middle English droun (to roar), the Icelandic drynja (to bellow), and the Gothic drunjus (noise.) So it makes some sense that we call UAVs by the name drones, as these machines do tend to emit a low, constant buzz. Though of course the size of the drone and its motor effect the sound it will make. Some drones are as large as jet fighters, others can fit in your palm.

Which gets us to the last curious meaning of the word drone: a person who is lazy and/or lives off the work of others. This is ironic, because if anything is true of the UAV, it’s that we designed them to do work for us. Soon enough, packages and pizzas will be retrieved and swiftly delivered by drones; and they’re likely to perform even more incredible feats in the future, like provide internet access and cultivate farmland.

New ways of using old words often reflect new realities, so I do wonder that if in the future, calling a person a drone might imply that they are industrious and eerily efficient.

Discovering Our Museum Philosophy With Our Visitors

*Note: This essay has been submitted to MuseumHack’s contest for thought leadership: https://museumhack.com/writing-contest/ I work at a Science, Art &…