Home At The Leo How Androids Help Bridge the Gap Between Fiction and Real Life
  
By Admin At The Leo February 15, 2017

When you hear the word android, where does your mind take you?  Does it take you the planet Tattooine where we meet C-3PO and R2D2?  Or does it take you to the year 2062 where Rosie from the Jetsons hands you a fresh hot meal?  Either way, Hollywood has had a major hand in helping androids bridge the gap between fiction and reality.

All androids and robots are machines.  They are computerized systems that combine the latest advances in electronics, information, technology, AI, mechanics and control engineering.  Man that was a mouthful.  Each piece of the puzzle is highly critical in determining whether or not the android can function to its full capacity.  Think about episode 1 of Star Wars (please, no boo’s) when Anakin was building C-3PO out of pieces found in a junkyard on the planet Tattooine.  Anakin had to build C-3PO bit by bit in order to ensure that C-3PO functioned properly. 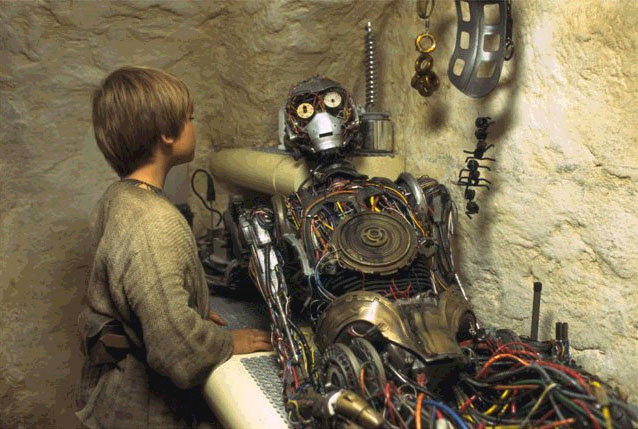 When we think about what an Android is, I would bet that most of think of C-3PO or R2D2.  You’re not wrong to think that.  Androids are specialized humanoid robots that look and act more like humans.  With their arms and hands, these robots can interact with environments designed for humans.  They are dexterous enough to use the same tools and operate equipment if they are programmed correctly.  Think about R2D2 in the Return of the Jedi.  It was his responsibility to override the security lock to the door on the Empire’s base.  Yes, he was shot by a storm trooper, but because of his Android features he was able to, for the most part, complete his task that would’ve otherwise required a human.

Androids are built and designed to assist humans.  Their development has helped the scientific community bridge the gap between Hollywood and real life.  For example, one of the most renowned android characters was Data from Star Trek.  His contribution to the metaphorical bridge, is that he is the quintessential android that scientists, artists and technicians are hoping to create.  He is what they all envision the final product to become.

How else are androids helping us in real life?  Two words; space exploration.  Following on the heels of Hollywood’s famous androids in space like Star Wars’ C-3PO, NASA has created their own version of a space traveling android named Robonaut 2.  This humanoid robot was built and designed at Johnson Space Center in Houston, Texas.  Robonaut 2 made its space debut in 2011 when it joined the rest of the crew on the International Space Station.  With no need for oxygen or a protective suit, Robonaut 2 can take on jobs that are considered to high-risk for human astronauts.  Some of those jobs include making repairs to tiles on the outside of the space station or replacing mirrors on the Hubble.  This android can take on mundane monitoring tasks, freeing up the human crew to concentrate on science and advanced exploration.

We are seeing more and more androids helping humanity.  Androids allow us to boldly go where no person has been before.  Whether it’s the deepest parts of the ocean or the outer reaches of space, Androids are helping humans discover new and exciting possibilities.

From now until May 6, 2017, our newest exhibit Alien Worlds and Androids features the cutting-edge technology and science of today’s space exploration.  It also highlights some of Hollywood’s most iconic droids and characters such as Iron Man, C-3PO, R2D2, Xenomorph, Robby the Robot and Gort. Each of these characters helped launch real life scientific and technological innovations that are used today.  Come experience this amazing exhibit while you can.  For tickets, click here.

The Many Forms of Aliens, And What They Say About Us

May 7th will be the last day at The Leonardo to explore our most recent travelling exhibit, Alien Worlds &…

Do Androids Dream of Electric Sheep? Can We Even Answer that Question?