Solving Problems with Technology and Art: The da Vinci Way

Art and technology go hand in hand (photoshop, anyone?) but I don’t know that we think about using those two disciplines as tools to solve complicated problems. Rather, we think about a technology solution or an engineering solution to a problem. But, rarely do we say, how would we use art to solve this problem? Instead, art is something to be enjoyed, a mystery to be appreciated and expertise in this realm granted to only a select, pre-disposed few. But, what if we thought about art differently? What if we thought about art the way da Vinci thought about it? Not as a pretty picture, but as a way to solve some of the more complicated problems of mankind.

Foremost among da Vinci’s numerous accomplishments were his myriad inventions. One of those inventions was a more accurate clock. The clocks of the 15th century were already portraying hours and minutes, much like we have today, but were often inaccurate and inconsistent. And before you say that clocks are still that way today, keep in mind that many of us use smartphones and watches that are connected wirelessly to the most accurate clock in the world, in Greenwhich, England. But, I digress.

The clocks of da Vinci’s day were operated by weights. Basically, if you think of a cuckoo clock, with weights at the bottom that can be pulled, you’ve seen a clock operated primary by weight. For example:

What da Vinci did was take the traditional weight model and throw it out the window in favor of springs to keep track of the time. What the springs did that the weights could not was simply retract faster, ensuring that as the minute or hour hand moved, it didn’t move forward or backwards a few seconds as the weight resettled into place. In short, he shaved a few seconds off the transition from minute to minute by utilizing the technology of springs.

But how does art play a role in this? In his drawings, da Vinci also included materials that would be used to make his clock—namely diamonds. Diamonds were still highly sought after in da Vinci’s day, and while the diamonds would make the clocks more desirable, they also provided a balance system that would allow the clock to function more accurately as the springs moved back into place. So, something crafted to beautiful, solved a very practical problem. 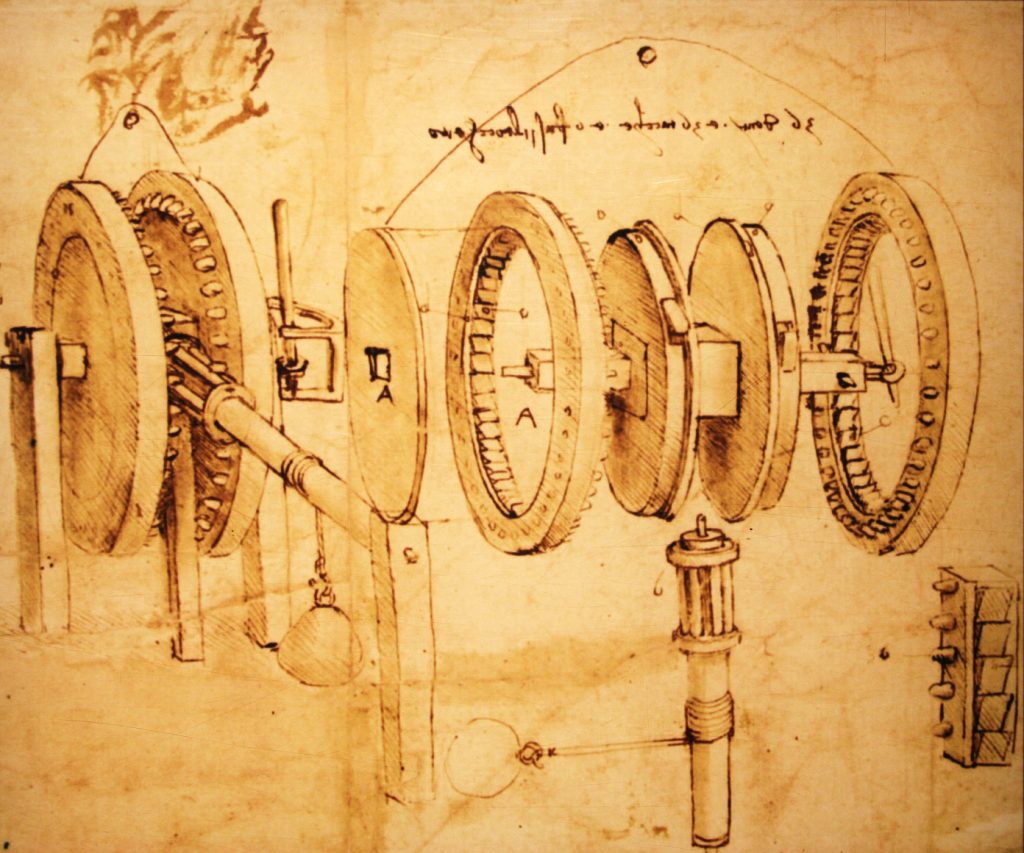 The next time someone tells you that art can’t solve problems, just refer them to quite possibly the greatest artist of all-time and tell them that they’ve got nothing on da Vinci.

Why not come and explore more ways to think differently and see the world as da Vinci did? Buy tickets to The Leonardo and visit us today!